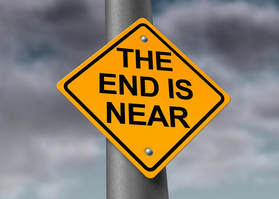 What are the last days?

In these last days the agenda for global domination by Satan and his forces is at full speed. The Bible says it will be a time of mass hybridization and the mixture and corruption of human DNA by fallen angels, also known as "aliens." The government is and has been conditioning the global population of this widescale corruption via Hollywood, science fiction, cartoons and other sources. However they are not telling you the whole truth. These aliens are not ascended masters, or enlightened ones, or beings from galaxies millions of miles away. Nor are they our forefathers or original creators. They are fallen angels who were kicked out of heaven for their rebellion against the headship of God and they believe they have one last chance to try and usurp His authority. They know He is coming to the earth to destroy them once and for all (Battle of Armageddon) and to gather those who are His and establish His theocratical reign on earth. The Lord has told me that in the coming days, these aliens will make their presence more visibly and physically known on earth. They seek only to destroy mankind; do not believe their lies. On this website I have many sources of information to awaken you as to what is going on now behind the scenes and why the church has suppressed this information from the people. I will not suppress it. There are two sources now trying to alert, warn, and condition mankind as to what is coming. One, the government, who will tell you half truths as to who and what these aliens are. The second, are the Watchmen of God. Who will tell you the truth of who and what they are.

The Veil is Being Lifted.

What is Bible prophecy and why is it important?

Bible prophecy is God's revelation to us about future events.

Throughout Scripture God reveals to us things that are to happen. These prophetic passages are found throughout the Bible, but those of most interest to many are those found in Ezekiel, Daniel, Matthew 24, Matthew 25, and Revelation.

In many cases we can see the fulfillment of prophecies in the historical portions of the Bible and in mankinds historical record. In other cases, the prophecies are yet to be fulfilled.Behold, the former things are come to pass, and new things do I declare: before they spring forth I tell you of them. [Isaiah 42:9]

God Considers Bible Prophecy Important...
He put so much of it in the Bible.

Although prophecy constitutes a large part of the Bible, its importance is constantly downplayed by those who dismiss it as having no practical significance, that it can't be understood, or by those who object to it on the grounds that it is a "fad" that takes people's eyes off Jesus. Others dismiss many of the prophetic signs as "conspiracy theory" and not worthy of their attention...


Studying Prophecy in the Light of Experience

All scripture is given by inspiration of God, and is profitable for doctrine, for reproof, for correction, for instruction in righteousness: That the man of God may be perfect, thoroughly furnished unto all good works. [2 Timothy 3:16-17]

Experience and history can aid in our study of prophecy. What we learn from the historical accounts recorded in the Bible as well as the laws and commandments put forth throughout Scripture can help us better understand the prophetic parts of the Bible.

Historical accounts of the Bible can shed some light on prophecy in that we can see God working through particular circumstances to bring about future eventualities. Unlike any other book in the world, the Bible contains hundreds of fulfilled prophecies pertaining to cities, nations, empires, and individuals that can be verified in the historical record. The literal fulfillment of these prophecies demonstrates the accuracy of biblical prophecy, and it only makes sense that yet unfulfilled prophecy to be equally accurate.

The Lord told us to watch for the end times, but many people are clueless about Bible prophecy because the churches aren't teaching it.

So many people...you talk to the people who are attending churches....I left the churches years ago. He pulled me out of them. You ask them, “Well, are they teaching prophecy?” My favorite subject when I was little. When I would go to church, if they weren’t talking prophecy I wasn’t listening. I’m amazed at how many people just have no idea; they’re clueless about Bible prophecy because the churches aren’t teaching it. That’s probably the number one reason the Lord is just pulling people out of them. You seem to learn more when you get out of man’s organizations and religions and you just start seeking Him directly.. He can lead you and guide you into the things you need to learn. So you learn more being on your own then just going to these man-made religions.