ORGONE IN THE BIBLE CODES

Orgone - Genesis 1:7
​
Orgone is a protection device in these last days that Yahweh is leading His people to to help them defend themselves against the constant attacks against our health and minds by the NWO Towers and Chemtrails. 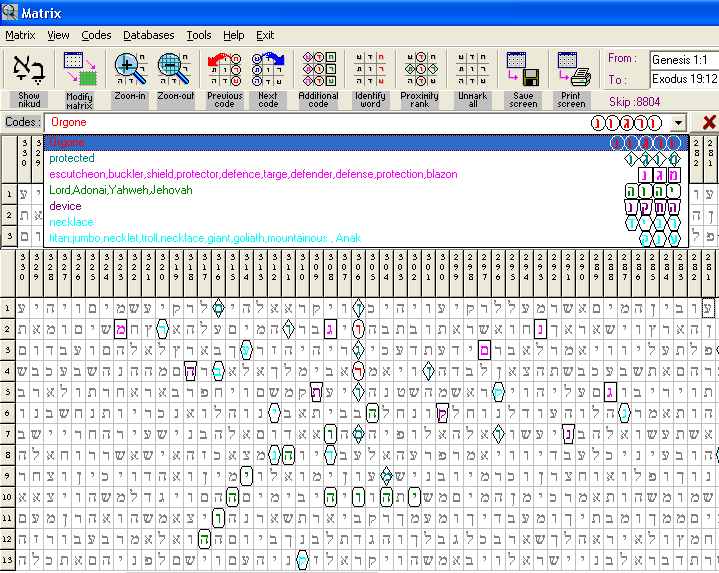 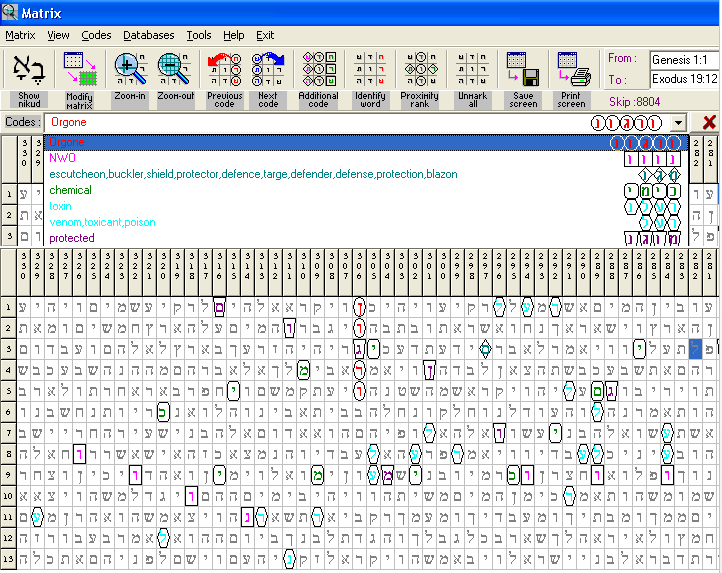 Learn more about Orgone and see the Orgone Necklace for Protection against chemical and poisonous weapon attacks from NWO Towers and Chemtrails
​
What is orgonite?

This word comes from "orgone". Therefore the first question should indeed be "what is orgone?.

Orgone is the name given by Wilheim Reich to this vital energy found everywhere among the creation. Orgone is also called "Ch'i", "Prana", "Ether", "Élan Vital", or "fifth element". This vital energy exists, in a natural way, under many different forms. It can be neutral (OR), positive (POR) or negative (DOR). A great observable POR manifestation can be seen under the form of a nice puffy cumulus cloud. Clouds are not just a concentration of water vapor, they're in fact a massive concentration of positive orgone, water vapor being in reality one of the many possible manifestations of the orgone energy. Wilheim Reich did a lot of research on the properties and behaviors of the orgone energy, in the 50's. He died in jail, after having his laboratory and much of his work destroyed by the "authorities", for they feared the naked truth knowledge of this orgone energy could expose.

So, what is orgonite?

It is a very simple technology, inspired from the works of Mr Reich and improved by Mr Don Croft. It transmutes (purify) deadly negative orgone (DOR) into neutral (OR) or positive(POR) orgone.

By using devices build with orgonite, it is possible to eradicate chemtrails from our skies, disactivate the haarp, gwen, "cell phone" towers and other nasty programs, and at last re-establish a positive energy balance while healing earth. It is also possible to make the reptilians run-away from this planet, destroy the so-called new world order and regain our human sovereignty.

How is this possible? Could the solution really be that simple?

Well, yes! Orgonite being a rather new technology, its inner workings remainl in the most part unknown to us for the moment. On the other end, it's effects can be observed easily be anyone taking some time to observe with an open mind.

Orgonite absorbs ambiant negative orgone energy, and transforms it into positive (or neutral) energy to finally send it back in the surroundings.

Is this a costly or complicated technology?
Fortunately not! That's the technology's strenght, anyone can build these devices with easy to find materials. Orgonite is simply a mix (50/50 ratio) of metal and resin (polyester, urethane or epoxy) to which we add one or more quartz crystal and/or other energy minerals.

Different devices exists, and each has it's best application. You'll find a detailled list with descriptions of the various devices used by Rot-tom, as well as instructions on how to build these yourself on this page.

You're talking about tangible results. What kind of results?
Since the beginnning of our activities withing the greater metropolitan area in Montreal in may 2003, we observed a impressive reduction in the amount of chemtrail spraying days, as well as a marked improvement of atmospheric and ground-level air quality (only 5 days of smog this year).

Also, a remarkable increase in the amounr of rain during the summer months was observed. This increased amount of precipitation and this better air quality are due to our direct actions against he Haarp, Gwen and other similar programs which are all used to control the weather, among other things. By directly targeting these installations with orgone devices, we are able to render the network of dead orgone (DOR) production required to control the weather, unstable and ususable. This way we allow mother earth to take back the control of her atmosphere, which is hers. We have to point out that our interventions are not intended to control the weather, but to stop the secret world governement for doing so.

http://www.hiddencodes.com/orgone.htm
Orgone is an energy. It can be made as a good energy or sabotaged and used as an evil, negative energy. Like everything, Satan always perverts and mimicks what God creates, has, or does.

I see what this positive orgone energy does to Satan and his Annunaki giants all the time in the Bible Codes. In fact I've kept quiet about a lot of it until now. If I reveal to 'you' what it will do and does, then 'they' know because they read everything I write. But if I don't inform Yah's people, they won't get busy and do the exploits that are needed worldwide. We are literally going to fulfill prophecy and that is why I can't keep silent anymore. Time is running out.

Terms I see all the time in the Bible Codes in relation to Orgone and what it does and is going to do to the Anuk/Nephilim fallen angels:

These terms describe Satan and the "aliens' reaction when they arrive here:

These terms describe what it will do and the results of what this orgone causes to and against them:

Can you imagine the shock and horror of the Man of Sin to arrive as a "God" or "Messiah" and he's covered in boils? LOL! And the laughter of God's people!! Satan won't be able to heal himself yet he can "heal" others to try and persuade them of who or what he is? The Bible Codes says it's COMICAL and an "Embarrassing Defeat" of Satan's forces who fully intend on arriving as "angelic hosts."

The air will be saturated with orgone and it burns them, it causes them to have boils on their skin, and they can't breathe, the 'contaminated' air asphyxiates them.
It's like a horrible plague that destroys them and causes their deaths.

There are so many "Christians" today who think it's their job to just sit on their butts and do nothing about the NWO but argue and rail against those who are doing something to battle against it for the Most High here on earth. It's not our duty as HIS people to EVER sit on our butts and just wait on Him, HE uses HIS PEOPLE to implement HIS PLANS. Even if it's just one person, or a band of 50, or 500, HE will accomplish His purposes through them.

It's easy to see how one of Satan's coming biggest defeats on earth is handed to him by just a handfull of people who love the Lord in WALK and talk. Why? Because the majority of believers today are sleeping, lazy, fearful, and kidding themselves of who and what they think they are in the Lord. In reality a fragment, a group of people out of the 144,000 who are already awake and know who they are in Him are the first ones to toss the NWO it's first major defeat and victory for Yehovah! Many people today are in denial of who they are. Inwardly they know they were born for a reason to be here in the last days because I hear from MANY of them. They just fight it, and in reality are fighting HIM and losing reward for being cowards and fearmongers and who will lose their position and rewards in Him if they don't get off their butts and start fulfilling His calling He has for them. If you feel led to do something then do it! Your instinct is usually HIM trying to get your attention!

Terms for Sherry Shriner's Orgone in the Bible Codes:

I find it often funny that in the Bible Codes, a term for Orgone is “cone fruit”. The pieces that we make, we put them in cones, so just to see that in the codes was hysterical. I never thought of that as cone fruit. You look at the whole Revelation chapter 12 war is about Satan coming after this group of 144,000 because they are producing fruit that can destroy him.

It’s interesting that in the Codes…I’ve always seen different terms relating to the Orgone. Oval is one of them. Cone fruit is another. The term “boulder” kept coming up. I thought “that’s the Orgone.” I knew it had to do with Orgone. But what I found interesting that I finally put two and two together. This “boulder” that’s coming up has to be these bucket blasters we’re making, because they’re much bigger and much more powerful than the little oval muffin blasters that we make. Even the 5 ounce sizes we make, and the 10 ounces, you can’t compare them to these bucket blasters. You can read all about those at orgoneblasters.com on the make your own page. I don’t sell the bucket blasters. It’s too much hassle to sell them. You can learn how to make them. It’s very easy and not complicated at all. If you can make a muffin blaster, you can make a bucket blaster. That term coming up a lot in the codes is “boulder” because it’s really saturating the atmosphere with the Orgone. It’s what is causing the Shema star to now turn yellow and crash. I talked about it last week on the show. How these stars are turning yellow…these starships are turning yellow and crash. Then the media says a meteorite fell to earth.

Now what kind of fruits can you build here on Earth? Well, you know, feeding the poor, you know, things we're commanded to do anyway. Feed the poor, you know, witness the Lord's name. The crown of righteousness for soul-winners. People who win souls for the Most High, for the Lord. There's a crown of righteousness for that. There's different crowns that are given. And so, what I like about it is why I got such a kick out of it was seeing in the Bible Codes refer to orgone as "holy cone fruit."  OK, that one's easy.  Holy cone fruit. That's a fruit! We'll be tossing those all over the planet.  'Cause not only that, you're putting the Lord's fruit out there, you're destroy and annihilating the wicked. That's a real easy fruit. Just getting busy with the orgone war, and getting orgone blasters out there, you know.