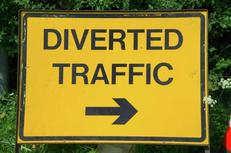 They are not counting on any one way route for Satan to take over this global government they're planning.

I work with the Bible Codes. I can always see two to three different routes that can happen in the future; which way we can go. Nothing is set in stone when it comes to the future.

Once these events start, they will drum roll into a flood and will happen very quickly one after the other. Just recognize what you are seeing and what route is being taken at any one time.

They aren’t counting on any one way route for Satan to take over this global government that they have been planning.

You have to keep in mind that we are under free will. That’s why the Bible Codes will come out with different routes for things to happen. Mankind has free will. The Lord reacts to how we act. So, if we do this…He’ll do that…if we do this we will go down this route…if we do that….we’ll go down that route. Free will is always an option.
http://www.sherryshriner.com/trib.htm

There are 3 different Raptures that take place before the Worship of the Beast and Mark/Chip of the Beast Enforcement:
​
​1. A group of the Elect leave before or shortly after the arrival of the Black and Pale Horsemen.

2. A group of the Bride leaves anywhere from 1-6 months after the Elect leave.

3. A group of the Bride leaves (Church of Philadelphia symbolized in Rev. 3) right before the Worship of the Beast and the Mark of the Beast Enforcement.

​This does not include the 'woman' the Jews who flee to their prepared place in the wilderness (Petra, Jordan).
Videos by Sherry
See My YouTube Channel
SUBSCRIBE - SUBSCRIBE - SUBSCRIBE
https://www.youtube.com/user/sherryshriner/videos
Apostates want to claim that the Mark of the Beast has nothing to do with barcodes, tattoos, or chip implants.  When it has everything to do with it. The Mark of the Beast is a technology chip implant that allows you to buy things by being scanned! Don't damn your soul to Hell for Eternity because you listened to false teachings, false prophecies, or trolls.
First half of Tribulation period. The Tribulation Period is about 4-5 years long not the 7 years taught in churches.