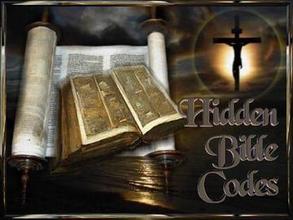 The Book That was Sealed by Daniel Has Now Been Opened, and the Words Are Revealed

As we can see from the things that are going on around us these days, we've reached the "time of the end" as mentioned in the Bible in the book of Daniel.  It was the Lord's encoded messages (the Bible Codes) that He has been revealing.  Sherry analyzed many Bible Codes over the years and spent many, many hours on each single Code to give us the most complete and accurate information and interpretation based on her research and her discernment as the Lord led her.

An Event Can Be Either Delayed, Cancelled, or Accelerated

Following are the Bible Codes that Sherry had found herself.  You'll notice that some of the Codes refer to events that have not happened yet, can no longer happen, or have happened in a different way from what particular Code findings revealed.  These things are normal.  An event can occur by way of up to five different routes based upon man's free will and their prayers, the enemies' free will, and God's will.  Therefore, an event can be either delayed, cancelled, or accelerated, and these terms will be found somewhere in the Codes for that event.  Sherry always let us know which one applied for particular Codes as she continued to analyze them.
​Check Out Sherry’s Codes – She Never Takes Them Down…

You know, I’ve warned about the month of July for years, folks. You can look at my Codes on HiddenCodes.com. Spent all of my time re-uploading all of my graphics for that website. And I had no idea there’s like 5000 graphics and Codes on that website. 5000. And I had posted Codes on their years ago. I think it was for 2004. But folks, just because a year’s posted doesn’t mean it’s over. It just means its delayed, pushed off. Maybe it was canceled, but I’ve never seen canceled. So that’s why they’re still there. Any Code that’s still on my site—and I’ve never taken any off that I know of. I leave them up, even if I did them back in 2001, 2003, because if they didn’t happen then they can always come back later down the road and happen. Time is not a finality thing here, especially when you’re dealing with Codes, because time is irrelevant. I just try to give people a, you know, “Hey, this came up in the Codes for 2003. Could happen this year, maybe not.” You know? Time is the least relevant thing out of a Code, period, because there’s always multiple times for any event that’s gonna happen. Always multiple times. And even so, the event could just go off into oblivion.

…Because As Events Change, The Hows And Whens Of Each Code Can Change
​
As we change routes, as we change leaders because we have free will, then you’ll see events just drop off the books, drop out of the Codes, because it would have happened if Hilary Clinton was elected President. This woulda happened if she was elected President. This is what would have happened if John Edwards was elected President. If Al Gore was elected president, that woulda happened. But now that we have Obama, are these events canceled? Are they still gonna happen? What’s exactly going to happen with Obama? Does that mean all the events that were seen in the Codes before are canceled? We have no way of knowing. No way of knowing. You know? Routes change, but sometimes even on the same routes events can still happen. So that’s why I leave it up. That’s why I leave ‘em up. It’s not a writing in stone kinda thing. It’s not a “thus saith the Lord” prophecy when you’re looking at a Bible Code.

Image of the Beast

Mark of the Beast

Prophet to the Nations​

Toutatis - Prison Moon of the Watchers